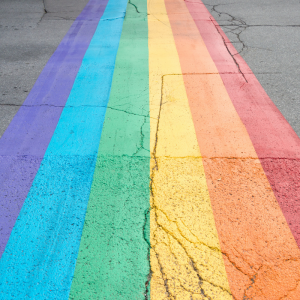 "I felt like I had a new lease on life. For the first time in a long time, I didn’t want to die. But I didn’t know how to live. How can I just be my authentic self?"

Why I never really came out in the traditional sense.

If you asked me to describe my life from ages 15 to 23, I’d tell you that those were the worst eight years of my life that I wish I could forget. If you asked other people they’d say that I went to summer college at Syracuse University, damn near a full ride to college where I finished a five-year degree in four and a half and that I went to and completed graduate school at Columbia University.

Hindsight is always 20/20 but at the time I couldn’t see that I was masking my pain with accomplishments so everyone around me would focus on that and not notice that I was mentally dying on the inside. I spent the majority of my K-12 education wishing that I could disappear or wanting to die. Through those years, I struggled with suicidal ideation, drinking and toxic ambition. I drank in hopes of finding happiness at the bottom of a glass. I drunkenly drove multiple times hoping someone would take me out of my misery. In between, I racked up accolade after accolade to make up for the emptiness I felt inside.

They always say to be careful what you wish for. Despite all of my destructive behavior, nothing bad, aside from a few severe hangovers, happened to me. On an average day in 2009, when I was 19, I was getting out of the shower I felt a lump in my breast that wasn’t there before. My heartfelt like it stopped beating because my grandmother had breast cancer twice and it seemed like the death knell I’d been waiting to hear had finally arrived.

Except I didn’t want it.

Wait what? Hadn’t I spend half a decade waiting for all of this to be over. Why did I suddenly fear death more than anything?

Those few months felt like an eternity. From the initial consultation to the scheduling of the surgery, to the biopsy results. I nervously waited and waited until they called. I rethought my entire life. Everything I had done up to that point was to make other people happy. I was never true to myself. I vowed that if I lived, that I was finally going to be me.

Again, be careful what you wish for. I felt like I had a new lease on life. For the first time in a long time, I didn’t want to die. But I didn’t know how to live. How can I just be my authentic self?

When it comes to my college friends, I never really came out. If you asked them, they would just say “gay happened.” Somehow, I think it was better that way because I probably would’ve chickened out if I had to have a formal conversation like I later did with my other friends and eventually my family.

In the early 2000s, coming out is often portrayed on TV shows as one monumental moment and a one-time thing. Maybe if you’re a celebrity that’s true. But if you’re like me, it’s something you have to weigh if you want to disclose that fact with every new person you made.

Another thing the movies didn’t tell me is that living as an out person proudly and unabashedly also takes a tremendous amount of energy and time. It’s not a light switch that goes off. It’s a slow growth process. Eventually, you find your friend group, your hangouts, how to live authentically as yourself in a way that fulfills you. For me it took from the ages 15 to 23 to go through that process but it was the best worst years of my life and I wouldn’t be the person I am if I didn’t persevere.

If I could go back to change one thing, it would be to have been kinder to myself.

If you’re thinking about suicide, are worried about a friend or loved one, or would like emotional support, the following resources are available 24/7:

One comment on “I didn’t come out. Gay just happened.”

PrevPreviousYou Can’t Sit with Us
NextWhat Cracked My EggNext