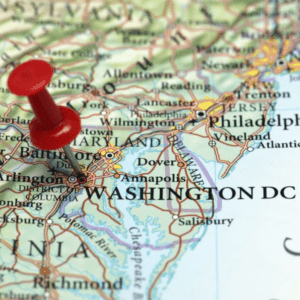 Remember when I mentioned in my writeup for Charlotte that this was the squirrely part of the trip? We’re not done yet. I originally planned to spend June in Philadelphia but, as with Atlanta and Charlotte, things changed. In this case, it was because I realized that there were more people that I knew in DC, including one of the main people I wanted to see on this trip. The other was that AirBnB’s were outrageously expensive. By that I mean, it was more expensive than what I budgeted for New York. As a result, I opted for a weekend in Philly before heading to DC (and squeezing in a quick trip home for Father’s Day).

I’d only been to Philly once when I was 10 and I remember nothing but being salty that the Liberty Bell wasn’t hung anymore and the streets were filthy. Needless to say, I had zero expectations for the City of Brotherly Love. Since I was only going to be there from Friday night to Monday night, I ditched my AirBnB habit for the comforts of a hotel.

I’m not going to lie, Philly really really shocked me in a good way. It dawned on me that it was my official arrival to the East Coast after spending four months in the South. I found the city to be incredibly walkable which was a pleasant change of pace, with a lot of culture, beautiful architecture, and some pretty good eats (shoutout to Federal Donuts!) I was able to see a few friends and my sister’s best friend & family during my whirlwind weekend which were the only things I cared about. Everything else was a bonus. I found myself incredibly sad to leave Philly simply because, similar to Charlotte, there was just so much MORE I wanted to do but for practical reasons, I knew DC was calling. Since I can’t officially rank pit stop cities for an ideal place to live, I’ve placed them in parentheses down below based on my limited experience.

I finally was able to get my train experience as I boarded an Amtrak for DC. To my surprise, you don’t need to get there crazy early and you also cannot check your bags on every train. What does that mean? It means you have to bring your bags with you on the train and place them above the seats. This was new information to me and with my two large bags, that was not about to happen, so I crammed them into the seat next to me, obscuring much of my view. With about 30 minutes left to go on the ride, the train slowed to a halt in the middle of a field and the lights went out.

Bitches was scared. *raises hand* That’s me: I’m bitches. I heard another woman in the back cry out, “I just wanna go home!” Me too girl, me too. Thankfully our horror movie moment was short-lived as we were back on track within a few minutes. I’d been to DC before as a kid (the same trip where I also visited Philly) and also as an adult with my ex-fiance. She was from Baltimore and so we’d always come to DC between Christmas and New Year. Being back was definitely triggering over the course of those weeks but ultimately, it’s unhealthy to stay in the past and let a terrible person ruin a place for you so I pushed past it.

With DC being an alternate city, I didn’t have the same level of enthusiasm that I had for other cities going in, but I was thankful to be able to sit still again after all of the packing, flying, and changing locations that I endured over the previous 10 weeks. For this month, my motto was to expect the unexpected.

Architecture. DC has such a vast array of spectacular architecture, from the unique designs of the national museum to modern architecture and homes made of brick or stone, there’s a lot of building eye candy to see. That said, one thing that is striking about the neighborhoods is that one isn’t truly distinguishable from the other. You could walk for an hour and have trekked across town or have circled the same block a thousand times. You really don’t know.

New Friends. I often eat alone when I dine out but that doesn’t mean I’m always alone. I made quite a few friends at restaurants just from sitting next to someone or ear hustling on a conversation and politely inserting myself. On one occasion, there was a woman sitting at a table next to me and a pair of people behind me. When the girl that was in the pair went to the bathroom, the guy she was with and the woman sitting next to me started chatting. I turned around and joined what was a very pleasant conversation. When the girl returned from the bathroom she asked if we were queer. The woman sitting next to me and I both said, “I am,” at the same time. Kinfolk! 4 Black queers that just happened to sit right next to each other.

Eclectic eateries. While DC didn’t blow me away with their culinary offering at the same level as other stops, they do have a flair for differentiating themselves from other restaurants. Bus Boys and Poets was a recommendation from my foodie cousin in Charlotte and the bookstore, lounge, restaurant, and bar that it is didn’t disappoint. Not too far from there, you can find Archipelago, a tiki bar with a drink called the Pineapple of Hospitality. The description of the drink literally says “Rum, Secrets.” I was in and it was delicious. While I was never told what the secrets were, it does come on fire and it’s a sight to see.

Heart Awakenings. As much of a hopeless romantic that I am deep down, I have a bit of a Grinch of a heart as I’ve never really found myself lucky in the love category. I happened to meet a woman on the queer app, Lex, and I was pleasantly surprised. At most, I hoped that we’d meet up for drinks and share a few laughs. Maybe see each other again if it wasn’t terribly awkward since I’m an awkward turtle. Instead, our first date lasted for 18 HOURS and we saw each other Friday through Monday on the 4th of July weekend. I even bought her a birthday present when it’s not until August. Who am I and what happened to the Angie I know?

Heart Awakenings. I don’t really like people that much and even more infrequently, I don’t meet people that I actually like and want to get to know on a deeper level. I found myself suddenly hating my life as I’m currently living it. As much as it opens me up to new people and experiences, it also shields me from being able to really dive in the way that I could if I actually lived in any of these places. Considering my track record in the love department, it’s probably better that way.

The weather. When I arrived in DC it was storming like nobody’s business. That trend continued over the first couple of weeks that I was there, hindering my ability to get out much. When the rain subsided it was balls hot and apparently, every bug in the world decided to eat up my arms at every chance they had.

Fireworks. The actual fireworks show put on by DC was great but as with every major city, there are illegal fireworks being lit across the city. The neighborhood I was staying in had a fireworks store on the corner so I had a feeling it would be bad but I had no idea that walking home would be like going through a warzone. I walked with my fingers in my ears to try and diminish the migraine that was rising from the noise and the air was smoky to the point that it triggered memories of the severe wildfires from back home. We were almost home free when some dumb teenagers actually shot a firework in the direction of my lady friend and me that barely missed her. Dear America: do better.

Being Queer in DC

For reasons stated above, I didn’t have the opportunity to lean into the queer scene as much as I would’ve liked but I was very aware of it. There is a pair of gay and lesbian venues in Adams Morgan and a few more watering holes sprinkled through Dupont Circle and Logan Circle. DC is progressive despite some of its neighboring states and the plethora of Pride flags drive the point home even further.

Being Black in DC

With a nickname like Chocolate City, it’s safe to assume that there’s a sizable Black population in DC. Like Charlotte, the city was very diverse and I never felt any type of different treatment or hostility from anyone while out and about.

DC is always an interesting place to me because it’s not an actual state yet it’s the center of our political universe. It provides a bit of discomfort for me, living in the middle of government dysfunction that I loathe with all of my soul. I think this trip was a bit more of a catharsis than an exploration. It was important for me to shed the skin of my past and make new memories in this place.

For sure. DC has a lot to offer and there’s not a functional reason that would make me never want to go back.

It’s a solid maybe. It’s not terrible by any means but I also wasn’t blown away as I was in other places. At first, I hated it and couldn’t wait to leave but with each exploration, I discovered something new and interesting that made me think twice. I get the sense that there’s more than meets the eye to this place and I need the time and cooperation from the weather to actually appreciate it.