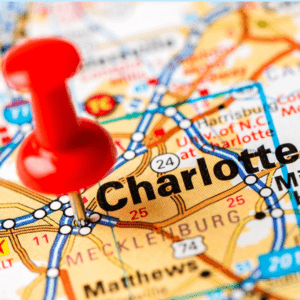 When I put the plan of my 12 Cities in 12 Months, most people said I was nuts. To a certain degree, I agreed with them. I’m a creature of habit and to throw caution to the wind every 4 weeks seemed like I’d be creating my own personal hell. The funny thing about habits is that you can always develop new ones.

After the first three stops, my body had gotten into the rhythm of reorienting itself on the 4th week to a new city. Despite having 3 different accommodations in Atlanta, the same feeling persisted. Atlanta has been the city I’ve stayed in the longest, clocking in at 5 weeks, and let me tell you: it was ready to go. It shocked me that my body developed this rhythm so quickly and also terrified me for how it’s going to react in the future when this journey is over.

The trip from Atlanta to Charlotte was the one I’d been the most excited about because I’d planned to travel by train, a mode of transit I never choose. Unfortunately, I found out the only Amtrak train left at 8 pm and arrived at 1 am. My goal in choosing this form of transportation was to leisurely take in the scenery of the country but that time frame wouldn’t allow for much of that to take place. So I flew.

That wasn’t the only change for this month. The plan was to stay a month in Charlotte, have a pit stop back home, and then head to Nashville for a week with a friend. I’d always planned to return to San Francisco to celebrate my mom’s birthday and Mother’s Day as they always happen to occur within the same week but an in-person work event was scheduled within 10 days of when I was set to come back to Charlotte and so I elected to stay home until then. My month in the Queen City (QC) was cut down to a week but I was so deeply impressed that I elected to add an additional 7-day stay after my week in Nashville.

This leg (April-June) was always going to be the squirrely part of the journey with a lot of fits and starts but my stamina got tested big time for this one. I’ll mostly be focusing on Charlotte but will sprinkle in a bit of what transpired back home as well as in Nashville.

Family. When I chose my cities, I carefully chose cities that had at least one friend or family member as a resident. Truth be told, only 3 people in my family live outside of California: my cousin in Dallas, my brother in Pensacola, and a cousin in Charlotte. This particular cousin, Krissy, lives for food as do I. Our food adventures during my second weeklong stay were as calorie-packed as I had expected them to be versus the first week when she had a stomach thing to work through. Her son, who I’ve seen they visit for holidays, took to calling me Ms. Angie which, for a goofball like me, threw me for a loop. BUT, homeboy plays baseball like I did growing up so I was in my element giving him tips and pointers before his game that weekend. He had the game-winning hit. Coincidence? I think not. (Dear future wife: Take note. This is where I excel. I’ll make our kids winners.)

Friends that might as well be Family. Serendipitous timing found me in Charlotte at the same time as one of my founder friends, Sonya. The QC happens to be her hometown, so it was great to see her in her element and sharing so much of what I’d heard about before in real-time. I was also fortunate enough to see two of my friends that I attended summer college with at Syracuse back in 2005. They both relocated to the city independently and I’ve barely had much contact with either of them in the years since. But there are some people that when you click, you just click. Seeing Yasmin and Kelsha added a fresh, youthful batch of energy to my soul that I desperately needed and reminded me of how far I (and we) have come since we first met 16 years ago. Yes, we’re old. And if you wanna talk small world, Kelsha went to law school with my cousin Krissy and they hadn’t seen each other since they graduated, so I was able to facilitate a surprise reunion there too.

Lifestyle. Over the years, I’d read about Charlotte emerging as a city that attracted recent grads and young couples but I never could grasp why. On the ground, you get it. Charlotte has a little bit of something for everybody: old, young, families, single people. You name it, they have it. It was a nice change of pace for me from Atlanta where things felt very one size fits all.

Beer, beer, beer, and great food. One of my regrets is that I didn’t get to all the breweries I wanted to, but how could you? The city is bursting with breweries which would certainly have resulted in a sizable beer belly for me if I had a whole month to indulge. I did make it to Olde Mecklenburg Brewery and Biergarten (Old Meck) which is known for its German-style beers which are my favorite and it did not disappoint. Haberdish was one of the many restaurants I visited but this place stood out, not just for the decor but also because I was introduced to boiled peanuts. Verdict? Fascinatingly tasty.

Cut short. My biggest regret here was that I couldn’t see everything I wanted, but what I did see was spectacular. I am glad I added an additional week after Nashville, otherwise, I would’ve had an even bigger sore spot around this fact.

It’s still the South. I found the city to be pretty progressive but it is still in the South. Go outside of Charlotte and T**** flags and confederate flags are plentiful. The juxtaposition of the two boggles my mind, just as Nashville did in comparison to its surroundings. The difference between the two is that you had an indication of where people were on the socio-political scale in Charlotte whereas that was not present in Nashville one bit which makes for an unnerving experience on the street.

Going back home. I love seeing my family and friends, make no mistake about it. However, once I landed back in the Bay, my family’s dysfunctional behavior was on full display and my mental health, already on thin ice, crumbled and I felt the walls closing in around me. My experience brought a painful realization to the forefront: returning to the Bay Area full time once this trip is over is not in the cards.

Being Queer in Charlotte

I didn’t get to lean into the culture as much as I would’ve liked to given the time constraint but Charlotte definitely has a queer scene and a pretty progressive mindset as a city overall. I did venture to the gayborhood and felt very much at ease but again, the stay wasn’t nearly long enough to make a few laps, if you will.

Being Black in Charlotte

To help paint the picture here, let’s start in Nashville. As I mentioned above, it was impossible to get a read on people that you pass by on the street which is bizarre and terrifying. I had no idea if I was safe or in danger at any given time. I’m aware I’m Black everywhere I go, but I was hyper-aware in Nashville. I drove from Nashville back to Charlotte (two-thirds with my friend and the remainder alone) and whenever I stopped for gas, I paid at the machine, waited in my car until it was done, and high-tailed it back on the road. Once I arrived in Charlotte, I was instantly put at ease by the diversity of friend groups on the street and seeing people that looked like me on every block. It was an extreme breath of fresh air.

The Queen City known as Charlotte is one that I was instantly taken by once I caught a glimpse up close. It doesn’t top a lot of people’s vacation lists but it should definitely make it on to the list at the minimum. It has the southern charm with a progressive edge and it’s growing like crazy. There is definitely more than meets the eye when it comes to this city.

For sure. There’s still so much exploring to do here and I intend to hit up every one of those breweries that are on my list. Apologies in advance to my liver.

I actually could with the caveat that it’s still in the South. One additional major factor is that my cousin is moving back home this summer so, it’s less attractive than it would otherwise be. If those two things weren’t true, Charlotte would be a real contender. Hell, it still may be. Nashville on the other hand is a hard no. Since I can’t officially rank pit stop cities for an ideal place to live, I’ve placed them in parentheses down below based on my limited experience.

Pronouns: The Power of Words

“What are your pronouns?” is a common question that is readily asked in modern society.