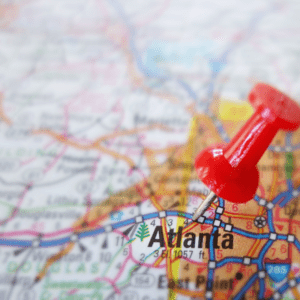 To quote Shakespeare, “Parting is such sweet sorrow.” As much as I loved St. Pete and didn’t want to leave, I remain committed to this journey and uncovering dormant traits and interests, while also discovering new things about myself and the world around me. My stops in Mexico, Austin, and St. Pete were scheduled prior to embarking on this journey and largely removed a lot of my stress surrounding where I’d lay my head each month.

Through no one person’s fault, I didn’t have the same luxury in Atlanta. Plans fell through, travel companions’ dates changed, and I ended up having three different temporary homes in the Peach State. The plus side was that I was able to experience three different neighborhoods and see the city with a fellow digital nomad from back home, solo, and with a slew of friends who live in Atlanta full time.

Coming into this city, I had a lot of questions but none more important than 1. What’s the queer scene like in a majority Black city? and 2. Why were so many people from California flocking here as a safe haven and seemingly thriving as a result? While my answers to these queries can be found below, I can see why people love the city.

In general, the weather is great, it has a great foodie and nightlife scene, and there’s always something going on. It’s equally the New York City and the Oakland of the South. There’s always someone out and about – like New York – and the lawlessness of Oakland is present, meaning everyone thinks “Oh, these signs are here for decoration, not for me to read or follow the rules as they’ve been written”.

Between random plan changes and my depression over leaving St. Pete, Atlanta started glaringly disadvantaged. When I was able to push that out of my mind, I still managed to experience the city and all it had to offer.

Street Art. A common thread across each location has been the street art, but where St. Pete had its quirky spin on it, Atlanta is simply overflowing with it. I mean, it’s actually overwhelming how much street art there is to take in. Historica themes, political statements, quotes, cartoons, gamer references, or just abstract, there’s no way you can visit the city and not take note of it.

The Beltline. One of the newest additions to the city, the Beltline, is the result of a research project designed by a local college student and pushed forward by his professor. It’s a strip of easements (a right to cross or otherwise use someone else’s land for a specified purpose) owned by utility companies prohibiting structures from being built on the land which results in a lot of unused open space, as it does in most cities. What makes this unique is that the easements create a sort of loop through the city that function as open spaces for public use. If you’ve seen the Highline in New York, you have somewhat of an idea of what the Beltline is. Similar to the Highline, the Beltline transformed the neighborhoods surrounding it. What makes this different are the various restaurants, bars, and shops that open onto it. It’s provided a welcome, walkable element to a region otherwise designed for cars.

Food. If you’ve been following along, you know I’m a huge foodie. Atlanta does not disappoint in this category. The area boasts cuisine from all parts of the world and seems to take pride in both the uniqueness of their restaurant names, as well as the dishes they serve. One notable treat was chicken and waffles with a peach cobbler topping at the Atlanta Breakfast Club. It was truly, truly amazing. I can confidently say that everything I ate in my time there was fire.

History and Culture. The city is full of sites of historical significance, as well as newer installations including commentary on the current political climate. The highlight here was going to the Dr. Martin Luther King Center, which is also the resting place of MLK and Coretta Scott King, Ebenezer Baptist Church, and the childhood home of MLK. In contemporary terms, there was also a lot of Black Lives Matter signage, including murals of those slain at the hands of the police and banners pressing for change.

Travel Buddies. Probably one of my favorite memories so far was meeting three gentlemen on my first night in St. Pete that lived in Atlanta and came down for the weekend. We had dinner together and they invited me to reach out to them once I arrived in Atlanta to check out the Black boat community. On my final weekend, I took them up on their offer and went up to Lake Lanier with a friend and it did not disappoint. The lake is beautiful, there’s a Margaritaville a short ride away, and it is not haunted, despite what urban legend says.

Nature. It wasn’t the number of parks and open space present in and outside of Atlanta that I found impressive, but the magnitude of them. My second Airbnb was adjacent to Piedmont Park, which is flat-out magical. And huge. Venturing out to hike Stone Mountain provided breathtaking views of the state. Fun Fact: at the bottom of the mountain, there’s a little stand where you can get a Certificate of Completion for yourself for climbing the mountain. I’m just gonna leave that here for everyone that calls Californians snowflakes.

It’s Still Georgia. Despite the state turning blue last year, it’s still very red and proud of its southern history/ My second Airbnb was adjacent to Piedmont Park, which is flat-out magical. And huge. Venturing out to hike Stone Mountain provided breathtaking views of the state. Inside the city, we witnessed a caravan of cars urging people to stop the Chinese Communist Party. Soooo yeah, red states and blue states are rarely 90-10, even in California. It’s closer to 50-50 in more places than you think and Georgia is no exception.

Water. This was the first time in my life I’ve “lived” in a landlocked city. I did not understand the effect it would have on my mental health until I was about a week into it. Growing up in the Bay, you see water with or without trying. With our weather it’s not like we grew up every day going to the beach but having easy access to it provides such a soothing effect. It’s indescribable the way my brain contracted without it. Lake Lanier provided welcome relief but an hour was just too little for me to get my proper fix.

The nightlife. Yes, Atlanta has a vibrant nightlife, but it’s also one that I don’t really understand. Everyone dresses up to some extent, sure, but you see people drop hundreds of dollars on tables, sitting there looking miserable and only interacting with the people they came with. For me, being more of a social butterfly, I can’t comprehend that approach. Like, why even go out? When I mentioned this phenomenon to my friends who live there, they all said the same thing, “Yep. Sounds like Atlanta.”

The parking hustle. Somewhat related to nightlife, but not exclusively so, is the parking hustle. Everywhere you go, there are private lots to pay for parking and normally it’s $20. What’s more is that a lot of establishments have some arrangement with the gas stations and you may find yourself having to pay to park there as well. It’s also inconsistent. I mentioned to a friend that I went to the same establishment as her, one week after she did, and we had wildly different experiences. We paid nothing to get in and $20 to park whereas she paid nothing to park but it was $100 to get in! Make it make sense, please. On one hand, I respect the hustle, but on the other, I’m annoyed that a lack of proper wages in the state has led to this nonsense.

Being Queer in Atlanta

The city is very queer-friendly and you see all the gays traipsing around the city, with a collection of gay bars in midtown. What I found off-putting however was both the cliqueness of the queens and the gender norms that everyone seemed to lean into. For the women, at least in the clubs, you have either Amber Rose or Lena Waither and there’s no in-between. As someone that finds themselves in the middle of the spectrum, it’s a bit of a lonely feeling. Other spaces surely exist that provide room for everyone along the spectrum, but it certainly felt like you had to be in the know to access them.

Being Black in Atlanta

In terms of race alone, of course, I didn’t feel singled out in the city. It is diverse, but more notably, there was never a time that I was out where I didn’t see someone that looked like me. What did feel isolating was that I found myself confronted with the same feelings I faced growing up: that I wasn’t black enough. That I talked white or didn’t dress the way everyone else did. I could see the glares of people as I walked by, struggling to figure out which box I belonged in.

I think Atlanta has a lot to offer and I can see why people love it – both to visit and to relocate there. If you want to turn up, you can do that. If you want a nice house at a reasonable price, you can have that. If you want a culturally rich Black experience, you can have that. There are so many nuances to the city it’s impossible to learn, understand, and appreciate them all in just a few visits or even a whole month. There have been rumblings of gentrification and change for the past five years or so, but I sense Atlanta is about to blow the **** up very, very soon.

Absolutely, there’s a lot more of the city that I’d love to see after COVID dies down more.

Hypothetically, I want to, because it has so much going for it, but I can’t. If I chose to relocate to another city, I’m inevitably going to have to start over, but I refuse to do it within the confines of not feeling queer or Black enough. If I could get past this sense of isolation I feel emanating from the place, the remaining hurdles would be the lack of easily accessible water and given what happened to my mental health upon it being limited to me, I don’t see this as something I could get over.