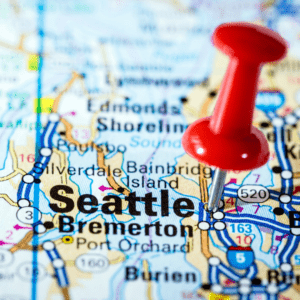 Seattle is a very queer-friendly city with a very lively queer scene.

When putting together my itinerary for this – 12 Cities in 12 months – I tried to make sure that two suitcases could handle the climates I’d encounter. Outside of hell freezing over when I was in Austin, my plan was working out pretty well. I had a small tote with my winter clothes, rain boots, and a long but light raincoat that I lugged around all year solely for the Pacific Northwest, aka Seattle and Portland. After living in 70+ degree weather, Seattle delivered a serious shock to my system with the cold and rain all around me.

Admittedly, my month in Seattle was never set up for success. I was running point for one of the Signature Events at my day job, StartOut’s Equity Summit: 45 speakers, 10 sponsors, over 400 registrants, 13 coworkers, 6 organizing committee members, 1 event coordinator, and me. Needless to say, at the end of workdays, I was completely gassed out. I didn’t have the energy to explore or to see people. I saw a couple of friends the first few days but I was pretty much under a rock until the event passed on October 20th.

The one exception to that was a visit from Sydney, my new love that I mentioned in Denver’s write-up. She visited for 4 days, the weekend before the summit was set to happen. Even though I was worried about her visiting before the summit, her presence was deeply appreciated and needed more than I realized. In Denver, our status was left as a puppy love encounter with an uncertain future. After her visit to Seattle, it solidified our feelings, our bond, and our desire to build a future together. It included a trip with my high school friend Amy to Leavenworth, WA, a Bavarian-themed mountain village about 2 hours outside of Seattle. For the Christmas lovers out there, they have a store called Kris Kringl that sells Christmas-themed items and Christmas decor year-round. It’s pretty magical.

All in all, I feel like my head was in the sand for a lot of the month, but there were still some highlights along the way.

The Food. Being back on the West coast was such a welcomed relief. Feeling the ocean breeze in the air is a benefit that I’ll never take forever granted again in life. What else does ocean proximity mean? Great seafood and a very diverse food scene. Seattle has several vibrant Asian communities and the food was amazing. Even the pre-packed sushi in the supermarket tasted like it came out of a restaurant. Because of my burnout, I didn’t get a chance to try everything on my list but everything I tried was a banger.

Public transit. Seattle on its own is a very walkable city which puts it a cut above a lot of the southern cities I’ve been to earlier in the year. That said, their public transit system is very convenient and ever-expanding. Between the Link, light rail, and buses, getting from neighborhood to neighbor takes between 10-30 minutes, making exploring super easy.

Old friends. Prior to 2019, I had one high school friend and one college friend living in Seattle. This time around? Turns out there are 6 or 7 people that have moved up there. It’s this part of this journey that I love the most: seeing old faces and catching up with them. It makes me wonder why we prioritize work and not our relationships. Why are we more willing to work overtime and not take time off? Why do we let our social media feed take the place of in-person experiences? This year has really opened my eyes to these things and made me re-evaluate the things that really matter to make a rich life.

Rain, rain and more rain. Ever since I was a kid I’ve hated rain. I hate puddles. I hate wet socks. It’s not my thing. With that in mind, you might also be asking why I planned to be in Seattle, in one of their worst months for weather. Well, one of my good friends Amy was getting married in October so it made the most sense.

In general, it worked out because COVID delayed weddings, creating a wedding-palooza that resulted in 3 weddings in 8 days in 3 different locations: 10/22 in Pasadena, 10/23 in Seattle, and 10/30 in San Francisco. Somehow I made them all!

Hermit mode. As mentioned before, I didn’t have much energy to get outside and the rain didn’t add much motivation. At the end of the day, I think the year has finally caught up with me and my body can sense that the end is near and is reacting accordingly.

Homelessness. Like most big cities, there is a homeless problem in Seattle. The biggest difference I found here was the way the homeless population interacts with everyone. At least 4 times walking through Pike’s Market, we were approached by homeless people with a spiel, asking for money. Homelessness is a real sore spot for me and I hate that America would rather go to war overseas than handle their own problems at home, but this was a bit jarring. There is definitely an antagonistic relationship that exists between the city and its homeless population that I’ve never seen elsewhere. Given my hometown’s (San Francisco) homeless issue, that’s really saying something.

Being Queer in Seattle

Seattle is a very queer-friendly city with a very lively queer scene. I wish I could’ve experienced it more but I did get to have a fun night out with Sydney at Wild Rose.

Being Black in Seattle

Growing up I’d heard that Seattle was really diverse. When I visited for the first time in 2019, I felt like I’d been lied to. I didn’t see it. All all. This time around, I saw a bit more diversity but I definitely felt “othered” walking around. Not unsafe, just “other.”

I feel like I was barely in Seattle if I’m being honest. Thankfully it was a place that I’d been to before so it wasn’t totally new like other places. Visiting in October is definitely not a good idea. I’ve seen the city in the summer and it is a glorious experience. I was not impressed the first time in 2019, but I was this time, despite the rain.

Yes. Between more of my friends living there and Sydney’s affection for the city, I definitely think there are many reasons that would bring me back to the Emerald City.

Maybe, yes. The rain is really hard for me to get past but there are a lot of redeeming qualities to the city and its surrounding areas.