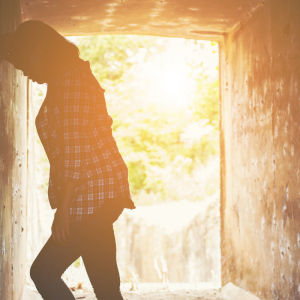 I didn’t know it then but that sick feeling I had was shame. Shame because I knew I was like those people they made fun of but I was afraid to admit it. To them. To myself. To anyone.

How my depression led me to want to die and why it didn’t happen.

That was the note.

It was 2005 and I’d decided my life wasn’t worth living. I was tired of being depressed, afraid to live in my truth and most of all feeling that no one would ever accept me or love me.  I was alone in the bathroom with a bottle of sleeping pills and cried.

To understand how I got here, we have to back up a bit. I’ve always been different. My family is full of big personalities but I was more reserved in comparison. They preferred attention grabbing activities and careers. I preferred to sit in a corner and read the encyclopedia. They were always the most popular in their respective friend groups. While I did have my own friends, I also made up imaginary friends who didn’t make me feel so different.

I went to an elementary school that required a uniform. The girls had to wear these God-awful navy and yellow plaid-ish dresses while the boys wore a white collared shirt and navy pants. Being the nerd that I was, I inquired my mother as to why I couldn’t wear pants since the letter they sent didn’t specify any articles of clothing that were exclusive to boys or girls. It just stated that all students must be in uniform. To my mom’s credit, she called up the school to ask and apparently no one had ever asked the question. In short, in the Spring semester of kindergarten, I was able to wear pants. Unbeknownst to me, that was the first seed of rumors that I started getting spread about me “not being like the other girls.” I thought that perhaps when I was done with elementary school, maybe I’d make new friends and I wouldn’t feel so alone. So misunderstood.

Once I was in middle school, I learned a new word. Bisexual. There were two girls in my grade who were bisexual. Of course, they were cool and I wasn’t so it wasn’t that big of a deal. “Maybe that’s why I’m different from everyone else. Maybe I’m bisexual.” I did get along with Amber and Shoshana, but I didn’t feel like either one of them exactly.

Elementary school had been a bust, and middle school was worse, but somehow I held out hope for high school. But by that point, the influences of my family weighed more heavily than anything else. I grew up the youngest of eleven in San Francisco. When you grow up with that many siblings, they, along with your family create a larger than usual influence on how you view the world.

If you’re black like me or have been exposed to black culture, you know there’s a deep amount of homophobia that runs rampant. Hearing constant gay jokes or slurs made about people on the street or on TV made my stomach turn. I didn’t know it then but that sick feeling I had was shame. Shame because I knew I was like those people they made fun of but I was afraid to admit it. To them. To myself. To anyone.

The fear of rejection, ex-communication and humiliation rendered me mute on the topic. Every day I woke up hoping things would get better. And eventually, after another bad day, every night I’d pray for death and cry when I woke up over and over again. I felt like there was a massive hole in my body that everyone could see. Everyone knew that I was worthless. That I had nothing to offer the world. That I was unlovable. This dark cloud followed me around more days than I care to remember.

Until one night I decided that enough was enough.

As I laid on the floor slowly working up the courage to take the pills, I thought through everyone in my life at that point and I wondered if anyone would miss me if I was gone. I couldn’t find one yes in the bunch. It felt like an anvil was sitting on my chest. In the midst of those swirling thoughts, the faintest of thoughts crossed my mind that said, “I’m too tired. I can do this tomorrow. Life will still suck”

That was fifteen years ago. While I’ve overcome those fears and live a life that I love, it was far from easy. I still struggled with depression. I still didn’t have anyone to talk to. The only thing I had were my notebooks, where I bared my soul on those pages. For every day or month or progress, I eventually had a relapse. In fact, that note, I kept it for six years because I just assumed I’d use it eventually. I know now that the majority of those thoughts were illogical, it also makes sense because the closet is an illogical place. It’s where fears and insecurities thrive.

Knowing that I wasn’t alone would’ve been a game-changer for me. I didn’t have a guidebook or a group of people I could talk to. Most of my friends were straight and couldn’t understand. Unlike the plethora of options today, I didn’t have a go-to role model on TV. The only representation available on cable was Marco from Degrassi or South of Nowhere (#SplashleyForever). The latter actually inspired a mantra I still lean on to this day: North of Oblivion. No matter how low I get, I’m still breathing so I still have a chance to turn it around.

Putting this on paper for the world to see, quite frankly, terrifies me. The amount of anxiety coursing through my veins is tremendous. But even though it’s my story, it’s not about me. If someone else sees themself in my story and feels less alone, then it’s worth the terror I feel as I write this.

MyUmbrella is my attempt to give everyone else what I wish I had. A sense of community. A sense of belonging. A place where there were people who had been through similar things that I could learn from, grow from and thrive from.

If you’re thinking about suicide, are worried about a friend or loved one, or would like emotional support, the following resources are available 24/7: