In middle and high school there was no way to feel safe being myself. I was barely okay closeted...and even then everyone knew.

This is the deepest and most personal thing I’ve ever written. I am non-binary. It’s important for me to say it that way because this isn’t something that I’ve just now become, I have been non-binary since birth and for me, I do not in my core, soul, spirit, ether, etc. feel that I am fully one gender or the other. I am both and none.

Plus everything in-between; I am a grey area. So is life.

I want those who read this to understand what I mean and try to empathize before breezing through my words. Stop, reflect, and just breathe. Understand for one moment what I am trying to express. Call it a selah moment if you want— whatever works. There’s no way to describe it, but females usually seem to understand what I mean better than males do. I have always felt a very deep-seated feminine energy inside of me but I’ve definitely felt the masculine as well. However growing up was difficult because we didn’t know anything about queerness in the nineties. You’re male or female, otherwise you’re different, off, weird, or an outcast.

In my opinion I’ve had a great life so far. …pause for sarcastic laughter…

Seriously, I tend to be an optimistic person these days and, at my core I truly am. Regardless of regrets, sadness, heartbreak, tragedy, or death— I’m really not trying to be dramatic— I find the positives in life anywhere that I can.

Anyway, I did my best to be a boy. I did all the boy things; walked the boy walk, talked the boy talk (but my voice was no help with that), and even played soccer. The gayest sport (just kidding) but why should I be? That’s a compliment.

I did like girls and was attracted to them but generally that’s all I was conditioned to do. Since I’m also pansexual (—idc what you got, I’m either just attracted or because I like you as a human) it wasn’t actually hard to have girlfriends. Not that I had many, I’m rather awkward. However, I knew deep down (very deep) that I was depriving myself of something.

Age-wise my brain is all over the place but I’m thinking about different instances. I’d say at 10 I knew something was up. I knew there was this other part of me I needed to nurture, discover, and let out, but by the time I really knew what was going on my dad moved us to Florida. Florida.

I love my family and friends there, but as a whole that state is no place for a queer person.

Yeah, I said it. Aside from maybe some Miami nightlife, St. Pete, and small parts through Orlando, there’s really no help or support in that state for the queer community.

I use “queer” as the same term to mean LGBTQIA+. I’m including us all with one word under the same umbrella.

No matter how you identify, we are all queer. Merriam-Webster says we’re all “differing in some odd way from what is usual or normal.” Fuck yeah I’m queer. Painfully so.

Back to Florida: it’s highly conservative, filled with a ton of people who are very traditional (not everyone), and Christianity is at the pinnacle of beliefs. In middle and high school there was no way to feel safe being myself. I was barely okay closeted…and even then everyone knew. So I was just the male Nic for a very long time, which was cool. I got to explore masculinity…ended up down the rabbit hole too far and became toxic by early adulthood but on the way down I got to really know that part of myself.

So now it’s time to merge it all together. Femininity + masculinity + the universe. I’m not just one or the other and I can’t split myself into a quadrillion pieces to separate the minute details that make up who I am as a human.

Looking back I think this is the reason I never felt the need to “come out” as gay because like, I’m not. Plus coming out is something we need to revise— let me explain.

I see a world where there is no coming out because being queer is the norm. Where it doesn’t matter who or what you are as long as you strive to be good, kind, empathetic, and everyone is equal.

Regardless of: gender— or not.

Regardless of: socioeconomic status.

Regardless of: any other single defining feature that makes one person different from the next.

Maybe I’m crazy, but that’s what I hope for and that’s the future I want to create for my kids and for our planet.

I do have to touch on climate change since I said that: we’re literally killing ourselves and we need to fix it or nothing else matters. If we destroy the planet and ourselves, that’s that. Are we all just silently hoping for the apocalypse anyway? Guess we’ll find out.

Like I was saying, I’ve never fully aligned with being gay. It felt better and more accurate than straight, but that still wasn’t…”it.” Once I began exploring gay Nic (not originally in the best ways or at the appropriate times in life; be honest with your relationships and don’t ever break trust), I understood that it wasn’t just being with another dude that I was missing. At points I was convinced that I was actually asexual and I just didn’t care anymore because I was just finally chill being me. I’m not asexual— but people are and they’re valid.

That’s what I think about. Does anyone else just think about their past, present, and future and evaluate, analyze, and discover things? I literally have at least one major epiphany per week. Having said that though I’m also an oblivious human. Anyway, all of that to say that I am going to start asking friends and family first to help me on this journey:

Before you think anything else, I want to say a few things about this; just a few, I promise.

It’s important to me because I always let other people stand up for and speak for me on this and I need to speak for myself now. It’s important because there’s an entire community of non-binary people and those still discovering themselves. I owe it to myself but also to the people like me. I want to be as visible as possible to prove that I am valid, my community is valid, and we’re not going anywhere.

We’re going to prove them wrong.

See what I did there?

I was lost for most of my life trying to understand just who I was. I will never stop trying to understand this. Now I can just be me in my entirety and enjoy things and enjoy life. My brain doesn’t have to be so bogged down with this intensifying confusion coupled with frustration that turned into internalized anger, self-resentment, rage, loathing, and depression.

It’s freeing but it’s also terrifying. It’s a million feelings in one. I don’t care what unsupportive people say or think, I sincerely don’t. I spent too long in my life catering myself to you. I catered my whole being to you people.

I forced myself to mold into something else that I didn’t even recognize by the end.

I trained my speaking voice as hard as I could and I loathed it neurotically just up until recently. I worked on concealing my mannerisms since the ninth grade when I raised my hand to answer a question in my Earth + Space science class and a popular jock made fun of how my wrist bent when my hand went up and then down. I started speaking more and more softly at some point and adapted mumbling as a way to conceal my voice and sound more “guy-ish.” I wore the most basic guy things I could that were also not ugly…but it was never really me, just something to camouflage myself into society.

My first day in my Florida middle school I sat alone at lunch until a very sweet human asked me to sit at her table with a couple friends. Eventually one of their other friends— one of my soon-to-be bullies— sat down and after a while said, “Why are you dressed so nice? I thought only gay guys dressed nice?” I wanted to die. I  was just dressed for the first day of school, literally jeans, new shoes, and a button down with a t-shirt under it. I thought I was doing good, thanks. It’s okay because this same bully, who was also my ex-wife’s bully, eventually reached out to us both on Facebook one day a year after graduation for some pizza because he had no food. Naturally, we bought the joker some pizza. My wife and I were young Christians and we wanted to do the right thing and help someone who had come to us specifically asking for help. He did it again a year or two later; we had grown up, we were broke too, we didn’t buy the damn pizza.

You get the point. Life up to almost now has been just a daze and it’s so discombobulating to not have that one, seemingly simple thing figured out by 25. Like walking through Stephen King’s “The Mist” except the monsters are all either yourself attacking you or bullies.

Is that dysphoria? ‘cause she’s real.

So what I would like to backtrack to is my preferred pronouns being they/them/theirs. Just typing that I got a knot in my chest. Why? Feelings.

Key point: I don’t want anyone to be afraid to mess up. I am personally never going to be offended to the point of retaliation if someone I know misuses my pronouns. I realize that for some more traditional friends and family it might be hard to adjust as well. I’m on a learning curve too. Can we grow together? That sounds less scary.

Now, if some type of person challenges me on it in some type of way: good luck and may the odds be ever in your favor.

For co-workers, friends, family, acquaintances, and anyone who’s known me by male gender pronouns: don’t stress

about offending me. Correct yourself and move the f*ck on. Even if you don’t, we’re in this together.

I’ve been training my brain for a while now (because that’s what it is) and it’s hard initially and I still mess up sometimes with others. Be kind to others who are gender nonconforming, because it could seriously hurt someone if you aren’t. It’s easier every day and as long as we’re not only aware but conscious, it’ll become second nature— as it should.

Normalize genderless pronouns for everyone.

Normalize everything that society has said is weird, odd, strange, different, and abnormal. 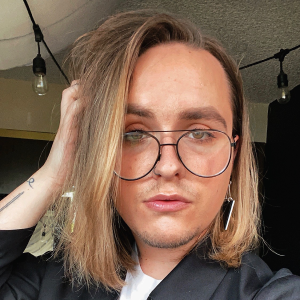 Nic (they/any) is a hairstylist at Bishops and lives in Portland, Oregon where they love to hike, spend time with friends, and enjoy the positive energy of others. Born and raised in the Bay Area until 12 years-old Nic was whisked away to rural Central Florida for the next twelve years. They explored a plethora of degree options ranging from culinary arts, business, music, healthcare, and finally cosmetology. They currently co-parent two children that live in Florida with their mother who make up their entire heart. Nic’s altar is always full of rose quartz to help promote the unconditional love of self and others. You can find them on Instagram @thenicryan or @lehairlabo for all things hair-related.