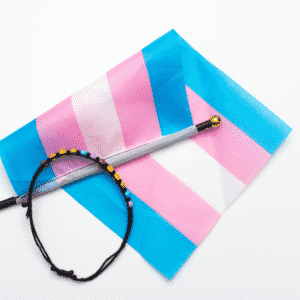 Sixth grade. It was in sixth grade when I finally figured out why I felt different. As a kid, I was either labeled a tomboy or people blamed my behavior on the influence of my brother. I was just a kid, but I found myself considering self-harm to cope with this feeling of “not being like the other girls.” Thinking about it now, I can’t see how my little sixth-grade brain thought that it didn’t want to live another day feeling like this. I just wanted to feel normal, but couldn’t for the life of me figure out how to do that. Finally, I came across this website called Tumblr. I know the younger me thought I was so edgy. While scrolling randomly for hours on end, distracting myself from the feeling of self-loathing, it happened. It was like finding the holy grail. I came across a post about someone who identified as transgender. Now, young me had never heard that word, let alone learned about it. The post was someone ranting about their dysphoria. All these words made no sense to me, but for some reason, I related to them. I decided to do more digging and at that age, my only form of research was searching transgender in the tags. After reading what felt like a hundred posts about being transgender, it just fell into place, like the last piece to a puzzle. I saw myself in those posts. I knew that’s who I was. I finally knew all these words that perfectly described how I was feeling. I felt at peace, knowing I wasn’t the only one like me. Then, the dread set in, that I would actually have to tell someone about this. I was terrified to tell my mother. I was her only daughter. Even though we never did many mother-daughter things, I still felt like I was going to disappoint her. I had to work up the courage to tell her, which ultimately failed. The most I had the courage to do was tell one of my close friends. Now, we were still young kids, so she didn’t really understand that I was coming out to her, but she accepted me anyway. This was my first win.

Seventh grade came around and this was the first year my school required us to change in the locker rooms. This was the most terrifying and uncomfortable experience in my entire life. One thing that came out of that experience was my newfound ability to get changed in about ten seconds. The most I told my mother was that I only wanted to wear boy’s clothes. She always tried to change my mind, but I was persistent. I wouldn’t even wear “boyish” clothes from the girl’s section. This caused many fights between me and my mother. She hated how I was “so difficult” to shop for and that I would cry if she forced me to wear a dress or “girly” clothes. By eighth grade, I caved. Her hatred for my wardrobe felt like hatred towards me. My mind completely shut down into a state of denial. To appease my mother, I wore the girliest clothes I could stand. V-neck shirts, actual bras, and jean shorts that were way too short for me to be wearing. I wore a small amount of makeup and felt that I could pretend to be this way for the rest of my life if only it would make my mother happy. Every day during that year, I felt a small bit of myself slowly getting chipped away. I turned to self-harm to punish myself for not liking these things. My mind was constantly reminding me that this was who I was supposed to be. I couldn’t take it anymore. I didn’t think I would make it to age 18 if I kept living like this. I decided that in high school, I was going to stand my ground again. I wanted to dress how I wanted.

When high school came around, I started wearing boy’s clothes again. It made me feel slightly better but I knew that it wasn’t enough. I needed someone to know who I really was. I went looking for help or for someone who might understand. That’s when I found my high school’s GSA (Gay-Straight Alliance). I wasn’t able to join officially because I needed my mom’s approval and I was not ready for that conversation. I lied to my mother about where I was after school and started to sneak into some meetings. I found that there were others like me. People were introducing themselves with pronouns and feeling confident in themselves. I wanted this. I needed this so bad. I was too anxious to introduce myself for the first couple of meetings I went to, but the teacher who ran the club eventually asked me to stay after to talk. I don’t know what came over me, but I basically gave the teacher a rundown of my entire life and revealed emotions to her that I had never told anyone. I was like a fountain of bottled up dysphoria and internalized transphobia. She completely understood me when I thought no one ever would. She became the only support system I had. She gave me the courage to come out to my friends. Some accepted me and some didn’t, but deep down, I didn’t care. I was feeling like myself again. I told people my pronouns and eventually picked a name that didn’t make me cringe when spoken. I felt like everything was getting better. I had the power to tell anyone.

This changed when I decided to tell my mother during my junior year of high school. I told her I didn’t feel like a girl. I made sure to tell her in simple terms because I knew she was going to get confused if I used technical terms. I ended up crying while explaining it to her because I felt that I was ruining the family and taking her only daughter away. I could tell instantly that it wasn’t going to go well by the look on her face. I can still hear the words she said to me, “Don’t tell me that you think you’re a boy.” It hit me like a stab to the chest. My own mother, who is supposed to love and accept me no matter what, didn’t. I left that conversation mentally and began to bottle everything up again. I felt like my whole world was crashing down. I turned to self-harm again and felt like I felt when I was younger. I thought I wouldn’t make it to 18. I eventually didn’t need her permission to join the GSA anymore and signed up officially. That meant I was able to go on their field trips. I remember one field trip was a party at another school. We all had to wear these name tags with our names and pronouns. I put my preferred name and pronouns and felt at home with all these other people in our community. I remember leaving that night so happy and feeling accepted. My night was going to take another turn for the worst. I walked into my home, forgetting to take off my name tag. Instantly, she noticed the peeling sticker on my chest, and my smile faded. She began yelling about how I was lying and how disappointed she was in me. My feelings came flowing out in the form of tears. I knew at that moment that I most likely would never get her approval. I never spoke to her about being trans again. I live a double life of being out in public and shoving myself back in the closet before walking through the door. I promised myself I would keep living until I could fully be myself. There is no way I’m letting her bury me in a dress. 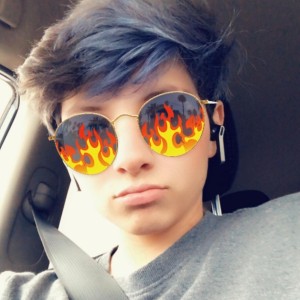 Milo Casas (He/him) is a trans college student. He lives in Illinois and attends UIC, majoring in criminology. He enjoys doing puzzles and researching cold cases. He is constantly binging Netflix. Follow his Instagram @milosaurusrexjr.