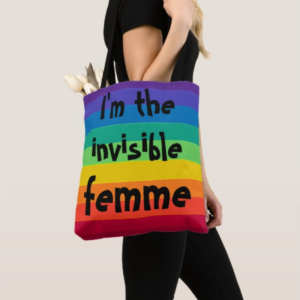 Femme invisibility reinforces the disadvantages of the queer experience by forcing a straight narrative upon a queer person. When outward expression loses its dangerously-bound correlation to what’s inside hearts and actions, then femme invisibility can become a thing of that past, and every lipstick shade of the rainbow will fit beautifully and proudly in the queer fashion show.

One’s identity as a queer person is constantly vulnerable to attack by the rest of society. Many people do simple mental math and associate certain outward expressions with certain sexualities. The assumptions and conclusions are not even seen as tendencies of the sexuality, but as strong, tell-tale signs or innate attributes of the identity. Everyone has been subject to seeing typical depictions in the media of queer women with ‘masculine expression’ (t-shirts, jeans, far away from the makeup aisle), and queer men with ‘feminine expression’ (girly colors, willingness to wear makeup, a put-together appearance most often correlated with women’s fashion.) Unfortunately, these stereotypes come with very little representation of people whose genders don’t fit with the male or female label.

This is what happens when a society that shames queerness is simultaneously obsessed with classifying its queer members by using checkpoints that are not rooted in reality or fact.

There’s a specific struggle for femme queers who, according to preconceived notions, don’t belong on the feminine side of things. It’s not a problem that can be solved with any singular action, since it’s a product of biases and phobias that feed off of each other.

Femme invisibility is the experience of one’s feminine expression leading others to assume things about their queerness or non-queerness. The femme identity has to do with a queer person presenting themself with feminine characteristics. This mustn’t be confused with the catch-all term of femininityーthis word refers to the global experience of traditional feminine styles and manners, while femmeness zeroes in on the queer community.

So, to clarifyーthis erasure would most often affect queer women and femme non-binary people, since it is widely accepted and acknowledged for gay men to be feminine.

There’s a spectrum to queer femininity, with, of course, sub-identities in between the poles. Various ethnic and sub-cultural groups have their own names and labels to describe the many identities that fall across this spectrum– high femme, tomboi, stem, chapstick, lipstick– to name a few.

Femme erasure is so predominantーin the media, and even within queer spacesーthanks to another messy merge. This time, it’s between internalized homophobia and misogyny. The internalized homophobia comes into play with the inferences of sexuality being anything more than biology, but instead as a fashion trend or fad. The misogyny in the mix is a double-whammy. First comes the assumption that femmeness is a commodity for the male gaze, and not something that could have a place in a relationship or experience devoid of cisgender men.

The second, more subtle sentiment, is the belief of femmeness being appropriate for a singular gender when in reality, it’s an expression and not a gender.

Femme erasure affects queer femmes (even the out and proud) in a multitude of ways. There’s the typical head-tilting disbelief from the person one comes out to. There’s the constant desire from others for a femme queer to confirm their sexuality because their femmeness “cancels out” their queerness.

Even within the dating pool, femmes have expressed hesitation to have a relationship with another femme, because of the learned notion that couples are made of a balance between masculine and feminine figures. And when femmes do date other femmes, others discredit the relationship as frivolous, once again bringing out the sexist thought that femininity denotes ineptitude.

This conversation would not be a complete one about this topic without acknowledging that with a feminine expression comes a conventional, “intact” outward appearance. Passing as straight has its benefits, especially having to do with safetyーa risk that a butch/masculine queer person or a feminine gay man faces whenever in public.

While that stands to be true, femme invisibility still reverses the coming out process, shoving femme queers back into the closet. Instead of these individuals being considered pioneers, breaking barriers and perceptions about queerness, the perpetuation of stereotypes prevail. It is another phenomenon of ignorance against the lesbian, bisexual, pansexual, or queer experiences of women and non-binary people, and a failure to imagine others with the complexity we ourselves possess.

To state simply: femme invisibility reinforces the disadvantages of the queer experience by forcing a straight narrative upon a queer person.

The history of femme invisibility stems from the initial invisibility of all queer identities and the utilization of certain appearances as a means for separation. Solidarity, survival, and substantiation can be reasons why someone presents as butch. It has taken a long time to recognize that these are also reasons why another person would identify on the femme spectrum.

“…As queerness became more than just a sexual orientation and grew to include a political affiliation and social movement, it became more important to find ways to set the community apart from society at large.”

Queerness can be more than sexual orientation, yes; it can involve the experiences of a person and how they fit into society and the queer community since the two have not yet been fused. Queerness definitely can concern one’s gender and how an individual affirms this. However, this broad definition of queerness should never be confused with the experience’s ability to be organized into boxes, because there simply is no such capacity.

Reclaiming femininity as a queer person who connects to that expression is never a simple process. Salvaging the feminine characteristics that serve as a source of joy and pride, and doing away with any ingrained sexist ramifications is such a fine line to walk on that most people outside the community neglect to take the time to traverse.

There is a glittering light at the end of the tunnelーdemonstrations of unity that are proof that people are fighting for femme queers, inside and outside the community. There are support groups in many major cities and queer scenes (Philadelphia and Boston being two of them). There is even a jewelry line called Sappho Life, created by femme queers. They make necklaces with a lyre charm, a symbol of Sappho, considered a matriarch of lesbians.

Wearing this necklace can signal one’s own queerness or solidarity with the femme queers, since it is inherently harder for femmes to recognize other queers, with a large number of feminine straight women in the world. (This business is femme wit at its finest.)

The fact that there is a definition for this experience and an ongoing conversation–stronger in some pockets than others, but nonetheless present, is a positive thing in and of itself. Every time a femme person is loud about their queerness, and who they’re dating, while applying their lipstick…it’s a beautiful baby pink step in the direction society needs to go.

A fellow queer friend of mine once told me, after I expressed confusion about my own identity, that my being queer in it of itself means there shouldn’t be parameters on my expression. That’s the whole point: queers don’t fit in boxes. It will never not be a shame that so much is erased from queer cultureーhistory, representation, and now a freedom for how any person presents. (Let’s be real, many people don’t think lesbians, bisexuals, and pansexuals, exist, so the idea of a FEMME person with this sexuality sounds as likely to someone as a fairy-unicorn-mermaid.)

Femme queers are as femme and queer as can be. When outward expression loses its dangerously-bound correlation to what’s inside hearts and actions, then femme invisibility can become a thing of that past, and every lipstick shade of the rainbow will fit beautifully and proudly in the queer fashion show.

“I look queer because I am queer, and thus the definition of what is queer-looking is defined by my existence, not the other way around”
-Mary Emily O’Hara. 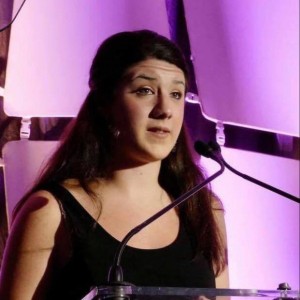 Alyssa Sileo’s artivist identity comes first and foremost in anything she carries out. She spearheads the international theatre advocacy initiative The Laramie Project Project, which fights for LGBTQ+ and minority visibility by honoring hate crime victims with worldwide performances of the acclaimed play. Alyssa is loves serving as the Public Relations Officer of Thespian Troupe 5480 and as a Youth Ambassador for the Matthew Shepard Foundation and Arts Ed Now.